I remember when this show was announced to be a part of Arcadians’ 2014 season and the auditions were coming up and it was the talk of the town. And I’d never heard of the thing! A very recent cult show, lots of friends had checked out youtube videos of the show and downloaded the soundtrack and it understandably had a huge effect on them. A 2.5 hour long show with only 6 actors on-stage? A contemporary drama-musical about a woman’s spiral into mental illness? Okay, this is already some interesting stuff. Throw in the announced cast list, where I went “Hey, those two were in Jurassic! And I’m doing JCS with those two at the moment! And I have no idea who the other two are!” and they had themselves one keen audience member who already couldn’t wait to see it. It was also refreshing to see Arcadians do the gutsy move and put on this modern show. I always love to see what’s going to be the next big thing – and this one looked like it was gonna be good.

Having seen the promotional photography of the show by Olav Lehmann, I noticed a rather interesting set design. A black leather chair in the middle of the stage – and everything else was just white. Pure white … oh, and a piano on Miners’ Lamp’s extra strip of land on stage left. But other than that, pure white. Yes, this is not your run of the mill spectacular musical. This was not just another musical. It was more of a Blackbox Theatre sh- ….. *Whitebox Theatre show. That one simple set became complex. White floors, white walls, white stools. They became the Goodman’s household, Dr Madden’s office, the school stage, a school room, just outside the school hall …. an airport I think? Point is, it wasn’t lazy. It WORKED! Unbelievably well. Director Kenny Ogilvie succeeded in having us follow the characters themselves and the story. The artistic effect of the set never seemed like it wasn’t enough or that it was trying too hard. That place really was the Goodman’s living room.

Story run-down: Diana Goodman (Bridget Keating) is a suburban mother, preparing her two kids for school. Her son Gabe (Kyle Nozza) and daughter Natalie (Stephanie Rodrigues). We soon learn that Diana has suffered from bipolar disorder and hallucinations for the past sixteen years, while her husband Dan (Pontus Alreyd) also deals with depression. When Diana comes to dinner with a cake singing “Happy Birthday” to her son, Dan reminds her that their son died sixteen years ago. Gabe is just a hallucination. A few days later, Diana begins working with a new professional Dr Madden (Johnny Acosta) after leaving her last, Dr Fine (also Acosta). Meanwhile, Natalie begins dating a guy from her school named Henry (Temujin Tera) who helps her deal with her own problems. Diana’s work with Madden begins to appear somewhat successful once she agrees that it is time to let Gabe go, until she attempts suicide.

Clearly there’s lots of mature and serious subject matter in this show. The acting required had to be phenomenal, and given the music, the voices had to be phenomenal as well. It doesn’t look like that this show would be easy to cast. Not until you imagine the auditions that these six people would have given. There may be only six, but this was one of the most well cast shows any theater could have. Each actor was perfect for their role – and not just “oh, yeah, they could play it”. They were all “YES! They HAVE to play that role!” (especially given their hairstyles at the time). They all looked exactly what they were supposed to be – to the age and to the lifestyle. I mean, two of the roles were brother and sister and the actors portraying them were actually together, but uhhh … So anyway! The acting ability, singing voices and character suitability of these performers were one of the main reasons why this was one of the best shows I’ve ever seen. 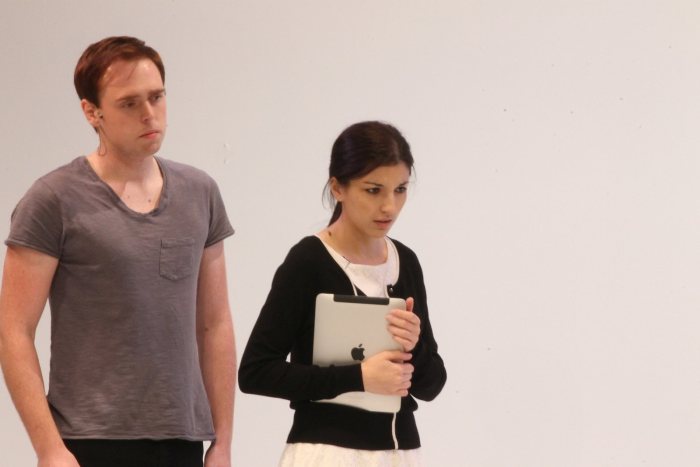 Kyle Nozza as Gabe and Stephanie Rodrigues as Natalie

Keating as Diana gave one of the most emotionally convincing and tear-jerking performances possible. All the while, so eerie and spooky with her unpredictability, yet sounding beautiful the entire time. Captivating in every scene, no matter the intensity, she delivered a perfect performance. I wish she’d do more Illawarra shows as I don’t think she could disappoint any show she’s a part of. Nozza, as Gabe, had the same eerie presence about him – a very dark aura. After all, he is playing the teenage hallucination of a woman, representing her dead baby – and Nozza’s calm and collected performance clashed incredibly with the crazy products of the rest of his family – who are all actually alive. However, his solo song ‘I’m Alive’ reminded us that he convinced us completely of the title of that song all the way through the show. Rodrigues was a fantastic stand-out as Natalie. Her flawless performance helped her stand her own ground as the daughter and made the show about her just as much as her mother.

Alreyd played Dan with so much passion and melodic singing – and combine that with his charm in the role of the long-suffering husband and goofball dad (which he was perfect at) and you have yourself one hell of a performance. A very quirky performance, he made us laugh a lot when appropriate too. The same can be said for Tera as Henry – who quickly became my favourite character. Funny, charming, believable and likeable – we felt for him and rooted for him just as much as the family. Tera was perfect for Henry. Another stand-out performer was Acosta (specifically as Dr Madden). His serious performance with fixed expression combined faultlessly with random rockstar screaming (through Diana’s hallucinations) made every scene with him a highlight. Also special mention to the orchestra led by Ryley Gillen (ps: buy his candles). They played superbly without ever drowning out the people on stage. The whole show sounded amazing with the music, voices (singing and acted) and lack of technical issues combined (the singing voices part with obvious credit to the incredible-sounding actors and vocal coach Jess Soden).

I was not shy about how much I loved this show when I went to go see it’s final Friday night performance. I wrote a facebook status saying that it was one of the best shows I’ve seen, to which Bridget Keating must have seen (as I tagged a few other cast members I knew) and commented saying that the cast and crew of Next to Normal just married me, if that was okay. Certainly is! I know from now on to get very excited if I’m going to see another production directed by Ogilvie, or with Keating, Nozza, Rodrigues, Alreyd, Tera or Acosta in the cast. Their combined efforts in the show was one of the most emotionally stirring theatre shows and Keating and Rodrigues specifically almost made me tear up (ALMOST!). It certainly made my friend I went with cry his eyes out. Four months on and everybody is still talking about how brilliant this show was (with one person I know saying N2N was the best show she’s ever seen). Arco’s, I don’t usually rate a show, but like I did with your show earlier this year Young Frankenstein, I would give this one a score of 10/10. Next to Normal was next to perfect. 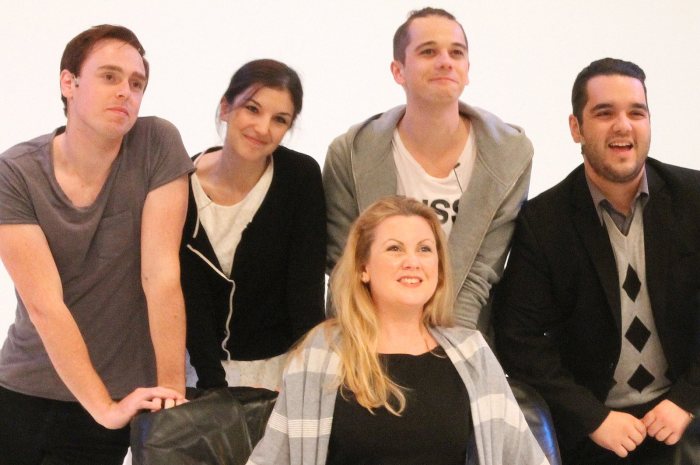 Nozza, Rodrigues, Tera as Henry, Acosta as Madden – with Keating as Diana sittin’ in the chair

* http://www.theatreillawarra.info/arcadians/normal/normal.html (Olav Lehmann’s photos)
* http://arcadians.org.au/show/thoroughly-modern-millie/#undefined3 (Arcadians next show Thoroughly Modern Millie. Their season so far has been just …. wow. So I have high expectation for this show)